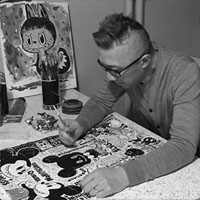 Known for his bunny-eared character Labubu, Kasing Lung is a celebrated illustrator who gave life to countless characters under his pen and brush. His artistic oeuvre is strongly influenced by Nordic folklore and myths, creating a magical realm where Labubu and his companions roam freely.

Since 2011, Kasing has been publishing illustrated books along with a series of collectable figures. In 2013, his first Chinese illustrated book, My Little Planet, was published in Taiwan. The following year, he was invited by the publisher De Eenhoorn to collaborate with the renowned Belgian storybook author Brigitte Minne for a children’s illustrated book Lizzy Wil Dansen. His illustrations were well received by audiences worldwide, which helped Kasing gain a following across the globe. Kasing has been switching his focus towards painting in recent years, and his works were met with immense popularity.

Born in Hong Kong, Kasing moved to the Netherlands with his family as a child; now he lives and works between Hong Kong and Belgium. In 2020, he held his first solo exhibition, This Is What It Feels Like at Hidari Zingaro, a gallery in Tokyo under the care of one of the contemporary art scene giants, Takashi Murakami. The Monsters and The Cosmic Stars (Supported by How2work)