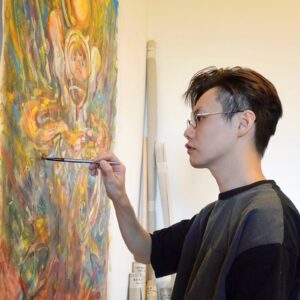 009 engages in the dialogue between reality and fantasy in a distinct international style, exploring philosophy and psychology topics while making frequent references to specific environments and locations.

The artist’s love for comics is reflected in his endearingly eccentric works and in his artist name 009, which is a homage to the manga series Cyborg 009 by legendary manga artist Shotaro Ishinomori. He draws inspiration from Japanese manga, comics and European modernist movements, wielding these various methods to create emotionally saturated visuals manifested through his vivid and vibrant works. There is a unique warmth to his work that is endearing, relatable, yet reflective to many.

009 graduated from the First Institute of Art and Design and worked as a toy designer and theme park architect before beginning his artistic journey as an illustrator and cartoonist. In 2009, he published his first illustration book Drawin9 Life. Besides painting, 009 also produces art toys, including his most recent character, astronaut Unio, that were met with immense popularity across Asia. The End is Another Beginning