"The most commonly used gadget that appears in the Doraemon series, タケコプター (Take-copter), is called "Bamboo Dragonfly" in Hong Kong, the characteristic of which has been vividly delineated in its name. I certainly wanted it when I was a child, so I could fly to anywhere at any time, especially during the tedious time spent in a classroom. The carefree youth time in the last years of the Showa era has long drifted away from the solar system. Yet, I still have not come across with a real-life Bamboo Dragonfly, nor an Anywhere Door (どこでもドア). Not to mention a buddy who would work out all problems for you just like Doraemon. In order not to let my childhood fantasies vanish completely and turn into a numb, ruthless old zombie, I have become an artist, splashing the remaining innocence left at the corner in this reality on the canvas.

I grew up influenced by the Japanese anime and idol cultures. Gundam and Doraemon; Matchy Cut and Seiko Cut, "ろっぽんぎじゅんじょうは" and "涙のリクエスト"; what a colourful era. From Heisei to Reiwa, I am fortunate enough to come to the birthplace of one of my cultures to hold a painting exhibition, and there is also a sense of warmth when you return to your hometown." 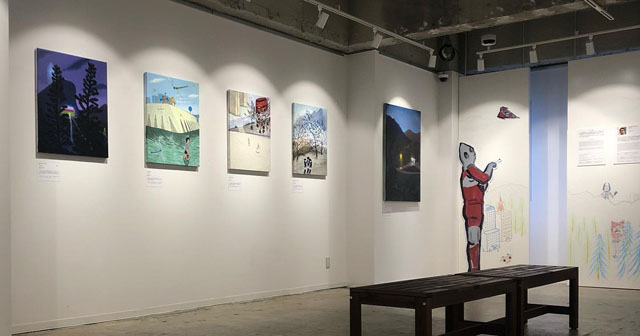